Where do these computers come from? They come from people and companies who donate old computers. We refurbish and give them new life, updating them with newest software and operating systems. We then pass these computers directly to the kids, the handicapped users, or service organizations. PatchX also helps these organizations by providing network and website services. It’s all about patching people into the world of computing.

This computer started what has now become PatchX. 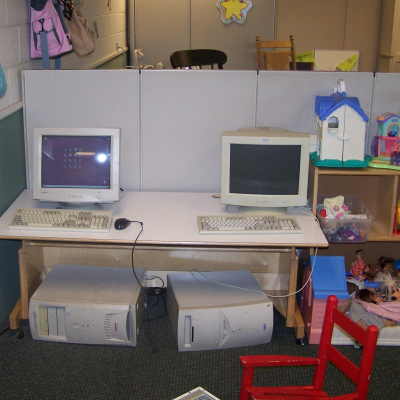 My dad has been a member of the YMCA for years and my wife used to work there. It is a great organization across the country for people to exercise and other events within their walls. They have a child care area that allows parents to go work out while their kids are taken care of by YMCA. This year had computers already but they did not work. We reached out to them and fixed up both computers PATCH1 and PATCH2 for them to use.

This computer is sort of like a cat with a couple of lives. The YMCA moved some things around in their play area and did not have room for the computers. We took it and brought it back to life for another pre-school. Sort of a recycle 2 recycle sort of deal.

This machine was also donated to the same Pre-school as PATCH1. They have over 55 kids enrolled so they needed another one to support the demand. PATCH2 was given back to us after the YMCA decided to move some things around and not use computers any more. The school we built these two for was the same one my kids went to so it was very cool to give back to a place that gave so much to my kids.

This computer was dead and brought back to life by Cory. He decided to follow in the PatchX way and donate it to two children without one. Even though we do not have the specifications for the computer I believe he loaded a lot of good open source software for the kids. Cory was able to fix another computer for us that I deemed gone. He wants to be a programmer and my buddy Chad Carter donated a signed copy of his book on XNA.

This computer was built for a three year old girl. I have worked with her parents for years and loved giving them a computer for their daughter. The first picture is great with her leaning on her hand. Thinking about her next move in the computer world. We have gotten an update since we gave her this computer years ago and she is on an iPad now.

This machine was built for a 12 year old boy. He just had knee surgery so we were happy to be able to give him his own computer. This picture is great with the Spiderman poster in the back. Reminds me of when I grew up reading Spiderman and Hulk comics.

One of the ladies that I work with had two computers that people told her would not work. We dusted them off and fixed one for her grand daugther and the other went to another good home. This is a great story of PatchX being able to fix one computer back for a child and also taking another one that could go to someone else in need. 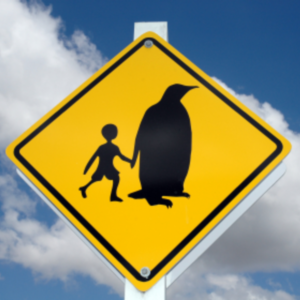 I found this mom on FreeCycle asking if someone had a video game system. I offered her a computer and she told me they have one but it no longer works. She has four kids and no working computer. The computer has been delivered but we were unable to get a picture.

One of the ladies where I work talked to one of the other families we delivered a computer and asked about PatchX. After finding out there was no computer in the house we were glad to deliver one to her daughter. Nice to get the word out about what we are doing and help another family. From the picture it looks like her little brother wants to see the new computer as well.

Well, this was a little different than what we normally do but the end result worked out great. We had fixed up a computer for their two kids but his brother had given him one before we were able to deliver it. The computer had a broken CD and DVD drives. His father had given him two out of his old computer. We took the computer home, updated the system via Microsoft update and put in the two drives.

This was another person found by a request from Freecycle. The request came from the roanoke chapter of the Blinded Veterans Association. They had a computer that was over 10 years old and was done working for them. We were able to get them a PatchX computer that would allow them to run their special programs. We also took the old computer from them and brought it back to life.

This girl had a computer that would not boot and had no CD-rom drive to play any games. Their old computer, they had received from FreeCycle so it was donated to PatchX. We exchanged computers and I took the picture of her with her new computer. That other computer would end up not being able to be fixed so we donated it to Goodwill. 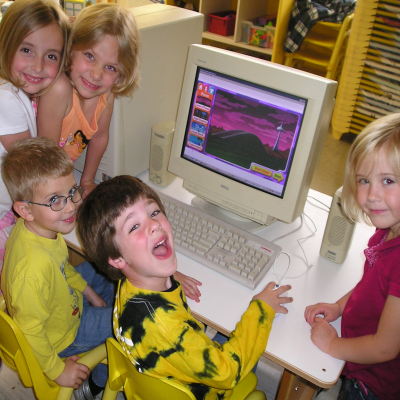 This computer was donated to a local pre-school. Their teacher posted a message on Freecycle asking for donations. We were able to donate a computer and help look at one of the older computers to repair it. Small world I actually went to school with the school supervisor. She knew someone was coming to give them a computer but it was quite a surprise to see an old friend. We love the excitement the kids gave to this picture for our efforts.

This computer was donated by some friends of my parents. I went over to help them setup their new computer and told them about PatchX. They offered to donate their old computer to the cause. The computer was setup for the boy who is in Kindergarten but I think his little sister who is pictured will end up using it as well. The system is loaded down with educational games to help them learn and have fun.

He was waiting for me when I pulled in to his driveway. I carried the computer in but he wanted to hook up the monitor, keyboard and mouse. After everything was hooked up he was excited to see BlockCad on there. This computer found a great home. Today helped emebed in me why we started PatchX and how one item can give and give again like a computer.

This was the first one of many computers donated to a Greenvale school. The kids love Chicken Invaders and Super Tux. They can play chicken invaders at the same time on one computer which I think makes it so popular. We can never get enough of these smiling faces for the work we have done on these computers. 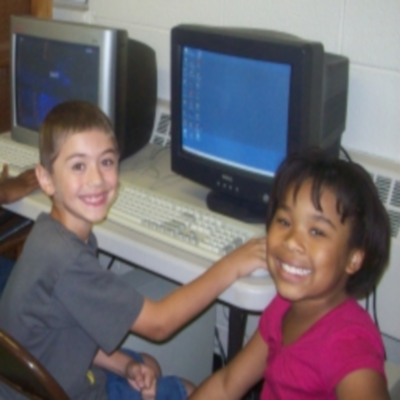 This computer along with Patch16 and Patch23 were donated to a Greenvale school.  I actually went to the school across the street when I was a boy. This picture shows Patch17 on the left and Patch23 on the right. When I went to deliver Patch23 the kids were all playing Chicken Invaders.

This is a story right out of Readers Digest. A friend of mine that I grew up with saw my PatchX link on Facebook. His mother contacted me with a computer and even offered to ship it to me. Very generous in my opinion. The computer come to find out was donated to a single mother who went to elementary school with both of us. I would also like to thank Robertson Marketing for the desk and my wife for giving it a fresh coat of paint.

We were able to give him this computer during his fifth grade celebration. This IBM computer has served my family well and I hope it will serve this family just as well. We tried to put all kinds of games and software for him to try out.

We wanted number 20 to be special and we got our wish. My mother saw his grandmother in a restaurant and she told her about this boy who is her grandson. He has some medical problems so we figured he would want a laptop to help with his school and fun ;).If you would like to learn more about Vincent you can go to his website by clicking here.

This is another non-profit school that we called up to see if there was a need for computers. They had two that were out of commission so we were able to come in and give them one. I have a feeling there will be more coming their way.

This computer was donated from one of my friends from High School that saw what I was doing on Facebook. His company had upgraded their computers and was able to donate four of them to PatchX. We apprecaite and still need any used computers.

I went to High School with these two girls father. His mom told me they did not have a computer in their house. They were both very excited to start playing on it. Looks like they had a game on the desk ready to play.

Our friends over at TwoRobs let us have an older iMac to try and fix up. Our knowledge base is more around Windows and Linux so this has been a great learning experience for us. We did purchase more memory for the machine to move it up to 512. We tried putting OSX on it but I am thinking we may need to move it back down to OS 9 or try putting Linux on the box. Like I said, we are learning so this one may take some time to be ready for adoption. Donated by:

This laptop was on its way out the door at Robertson Marketing Group and we were able to save it. We have been trying to find a good home for this computer and it happened of all days on Valentines Day. Both of these teachers will be using the computer to help with lesson plans for their students at the day care.

This may be the worst picture I have taken for this site. I forgot my camera so I used my phone camera. The kids at the day care were watching a movie so I did not want to bother them to pose for a picture. Check back as we will get a better picture up there.